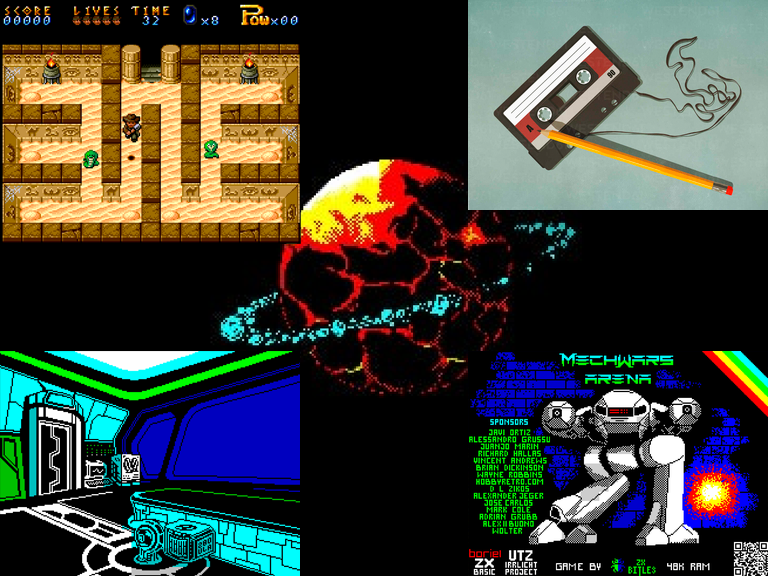 There are four different news items today. To avoid confusion, I’ve titled each one.

Games that bring people together

Among all the games on our beloved Speccy, a separate category is reserved for those few that bring people together. Get it? Yes, these are games that can be played simultaneously with a friend or even a few friends. Such games, unfortunately, not very many, and the more happy that they continue to come out. We have accumulated a few of these games from different authors, but I will submit them one by one to be able to look at each one in detail.

So today’s game came out last fall. It’s called Mechwars Arena by the ZXBITLES team. This game is about a dark future of the planet where governments use the base instincts of humans to control society. They have turned mechanized machines (Mechs) into entertainment and are staging gladiatorial fights.

It’s up to you to take control of one of these machines. At the same time, your friend can control the opposing side’s machine. Who will win?

The game is great for a warm summer evening in small company. You can beat up a school friend or work colleague just like in the good old days, and rejoice at your victory.

The game is already published on ZXOnline, if you didn’t download it earlier, you can download it now and thank the author for his work and great idea. Curiously enough, the game runs on classic ZX Spectrum 48k and even great 1-bit music fits in there!

The anticipated RTS game Torn Metal is making progress – the authors are actively drawing graphics, writing music and drafting missions. The game’s engine is ready and there’s even a demo version which I was not allowed to publish, and also a video report on the work. If you haven’t seen it yet, take a look. From the looks of it, the game turns out to be interesting and unusual. In the sense that there are very few games like that on ZX Spectrum.

About the physical versions

Hooray, we found a way to resume selling physical versions of the games on the website. Unfortunately, there are restrictions. We had to block payment for the physical versions via Paypal for EU residents (sorry, guys!) to avoid double taxation, but plastic card payment via Advcash works – it’s a good, checked and safe payment system. Moreover, you don’t have to pay VAT when you use Advcash. Also, you can throw out your crypto (what else it is for?).

The second limitation is the inability to send physical goods to Russian Federation. Yes, for now. But we are working on it.

By the way, if you want to buy something physical on ZXOnline – don’t put it off, because their physical versions probably will not be built again.

About the Egyptian pyramids

The Pat Morita team, which developed Shovel Adventure game, which took 5 awards in different nominations of ZX Online Awards 2022, decided to create ZX Spectrum Next version. For this purpose authors started fundraising on Kickstarter. The required $3000 threshold was reached in a couple of days, which is to be expected (the game is awesome!), but first of all you can found this thing interesting because for donations the authors promise very-very tasty gifts like physical versions on cassette, SD-card with inserts, posters and other stuff – well, have a look just in case.

Well, that seems to be it’s all for today. I plan to publish more games to play with a friend in the near future, and other news. Thank you for reading to the end!